Welcome to Thamserku's Covid-19 updates page. Here, you will find important information and news related to the coronavirus pandemic. We update this section regularly.

Nepal is aiming to swiftly vaccinate its population by the end of February 2022. For that, the government has laid out its plan.

Nepal recently received 1.6 million dozes of the AstraZeneca vaccine and is actively vaccinating its population. The government also has plans to purchase 6 million Pfizer vaccines for 12-18 year old population. But vaccinating the older population is in its top priority.

As of Monday (23rd Aug, 2021), 4.9 million people have taken their first dose of vaccine, while 3.8 million have been fully vaccinated.

In total, 13.2 million of vaccines have been received by the government so far. The Covax initiative has also brought in 348,000 vaccines into the country. The nationwide infection tally currently stands at 751,000 with 38,250 active cases. More than ten thousand Nepalis have perished from this infection so far.

The government aims to bring in 42 million doses of vaccines by mid-February 2022. It is estimated that around 78 percent of the 30 million population need to be vaccinated.

Extension of Lockdown to Another One Week

Due to the increasing no. of cases in Kathmandu valley, the District Administration Office, Kathmandu has extended the existing one-week lockdown, which started, from 29 April 2021 to another one week until 12 May 2021. Like the previous lockdown, all the non-essential activities and movements will be suspended for the above stated period.

In the wake of rising COVID cases in Kathmandu valley, the local authorities of three districts - Kathmandu, Lalitpur and Bhaktapur have decided to lockdown the cities for a week time starting from 29 April until 05 May 2021. All the non-essential activities will be closed down and only the emergency and essential activities will be allowed to operate. No vehicular movements (both public and private) inside Kathmandu valley and other vehicles coming to Kathmandu from outside districts will also be strictly monitored at different check posts.

The first dose of COVID-19 vaccination officially kicked off today. Health and sanitation workers deployed in the frontlines will first receive the vaccines in the first phase of the campaign. Over 400,000 frontline workers will be included in the initial stage. The India manufactured COVISHIELD, one million doses of which have been provided to Nepal by India in aid, is being administered by the government on the aforementioned group. COVISHIELD is the Oxford-AstraZeneca vaccine which is manufactured locally by the Serum Institute of India.

We worked closely with other like minded travel companies to develop these important Safety Protocols on Mountain Tourism post COVID-19. These are basically the practices that need to be followed by different stakeholders for their and others' safety.

In Nepal, the figures released by the Ministry of Health record a total of 16,168 (8th July 2020). Nepal is ranked 61st in countries regarding cases of Covid-19, the viral pneumonia that affects the planet. The number of fatalities remains at 35. In contrast, in the country there are 7,499 people recovered as of today.

Life has returned to the streets, although there are still some restrictions, especially for hospitality sector, traffic management, schools but most businesses have reopened their doors. The economy is trying to restart slowly as quarantine was suffocating the it.

Few days ago the government opened the entrance to many emblematic places in the city such as the Swayambunath temple and the Boudhanath stupa among others. Little by little the streets of Kathmandu seem to return to normal, although movement between districts is still not allowed either.

We will keep you informed of all the news that happens. 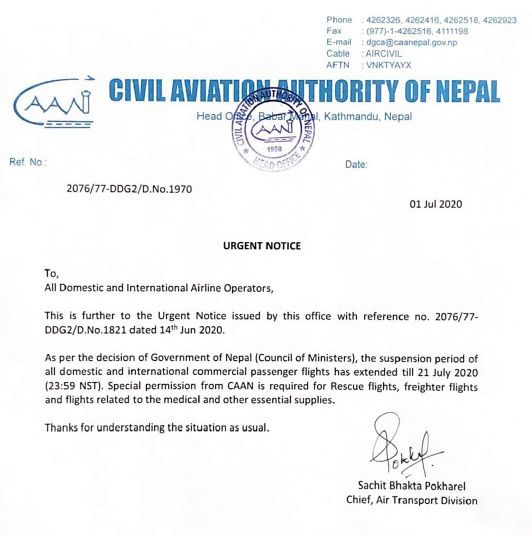 Extension of suspension period of domestic and international commercial flights

We must also inform you that the international airport as all domestic flights will be suspended until 21st July. We trust that the government will communicate its plans, we will keep you informed if there are any changes.

The Covid-19 has brought the tourism to a complete halt. The Tribhuvan International Airport (TIA) which is the country’s only international airport so far is going under renovation and construction works. New sterile departure is completed already and the new hall is under construction with old one being demolished. The construction of parking and runway expansion is completed as well along with the taxiway and the centerline light.

The Civil Aviation Authority of Nepal (CAAN) started the expansion of Tribhuvan International Airport in November 2017 and since 2018 most of the morning flights to Lukla were being commenced from another airport in Ramechhap which is about 5 hours drive from Kathmandu.

TIA utilized the lockdown to construct and renovate where around 400 flights were being operated daily. At the moment only cargo and repatriation flights are being operation from TIA. 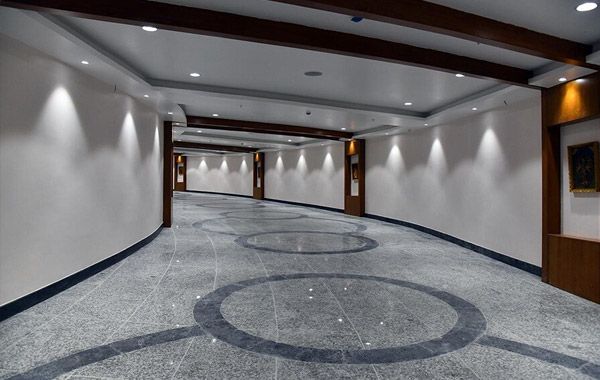 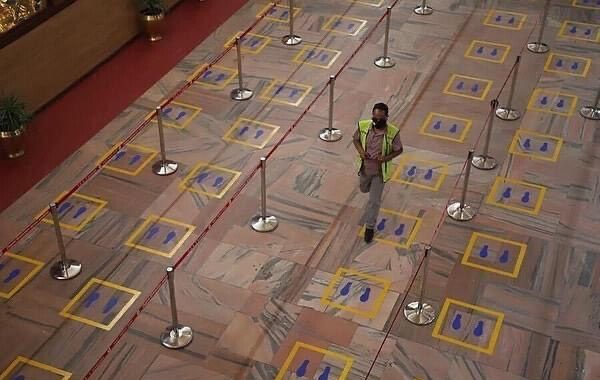 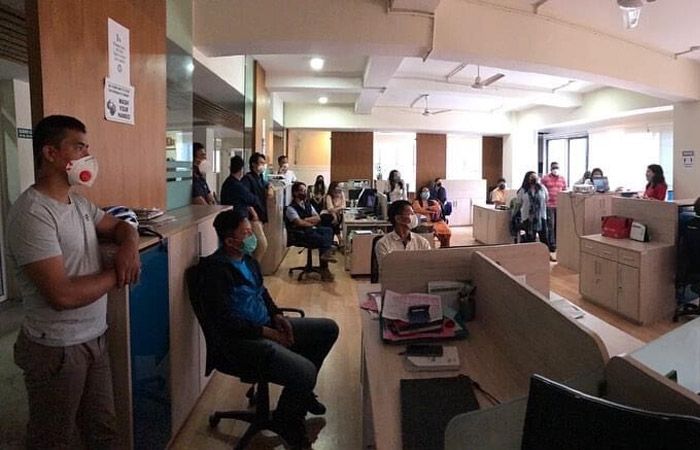 With an aim to slowly make it a habit of coming to the office, our team at Thamserku have been coming to the office twice a week on a rotation basis (department wise) However, our dedicated core team can be seen at the office daily from 10 am to 1 pm. At Thamserku, we are maintaining safety and health measures to keep our team safe. Everybody needs to follow our “Safety Guideline Procedures”. This includes, frequent hand washing, sanitizers, use of face masks at all times, temperature checks upon check in, avoid common areas and physical distancing. Furthermore, we ensure that our workspace is also safe to use as there are regular sanitization and cleanliness procedures being followed.

Among all this COVID 19 situation, we continue working on giving the best of us